To determine whether chimpanzees are more likely to delay gratification for a cooked food reward than they are for a raw food reward, cognition researchers Felix Warneken and Alexandra Rosati conducted an experiment comparing chimpanzees' decisions in two situations: a "raw-delay" condition and a "cooked-delay" condition. In the raw-delay condition, Warneken and Rosati offered the chimpanzees a choice between receiving a piece of raw food immediately or waiting for one minute to receive three pieces of raw food; the researchers tested 60 chimpanzees in the raw-delay condition. In the cooked-delay condition, in which the chimpanzees could receive one piece of raw food immediately or wait one minute for three pieces of cooked food, they chose the larger, delayed reward approximately 85 percent of the time. 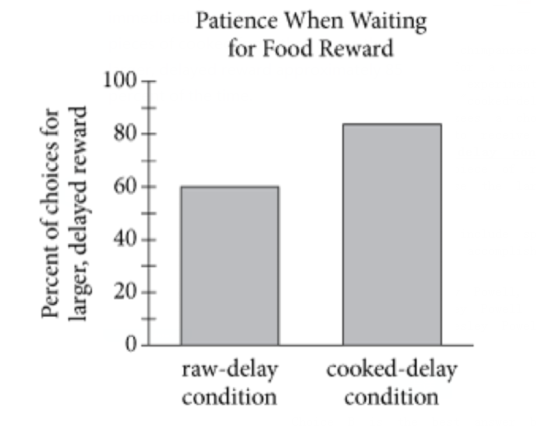 The writer wants to accurately incorporate information from the graph, which presents data collected during the experiment described in the paragraph. Which choice best accomplishes this goal?