JUDY WOODRUFF: Now to our "NewsHour" Shares, something interesting that has caught our eye. Brian McCarty's photographs focus on conflict zones as seen through the eyes of children. A 5-year tour of an exhibition of his work has already made stops in Houston, Texas, and Little Rock, Arkansas, and he shows no signs of slowing down. The "NewsHour"'s Julia Griffin has this profile.

JULIA GRIFFIN: Brian McCarty's camera chronicles the horrors of war. But, unlike other war photographers, his subjects are plastic, locally found toys carefully arranged to recreate the experiences of children traumatized by conflict. It's all part of McCarty's ongoing War-Toys project.

BRIAN MCCARTY, Photographer: War-Toys is a photo series about children's experiences of war. Through an art therapy-based approach, children essentially become art directors for my photos of locally found toys. 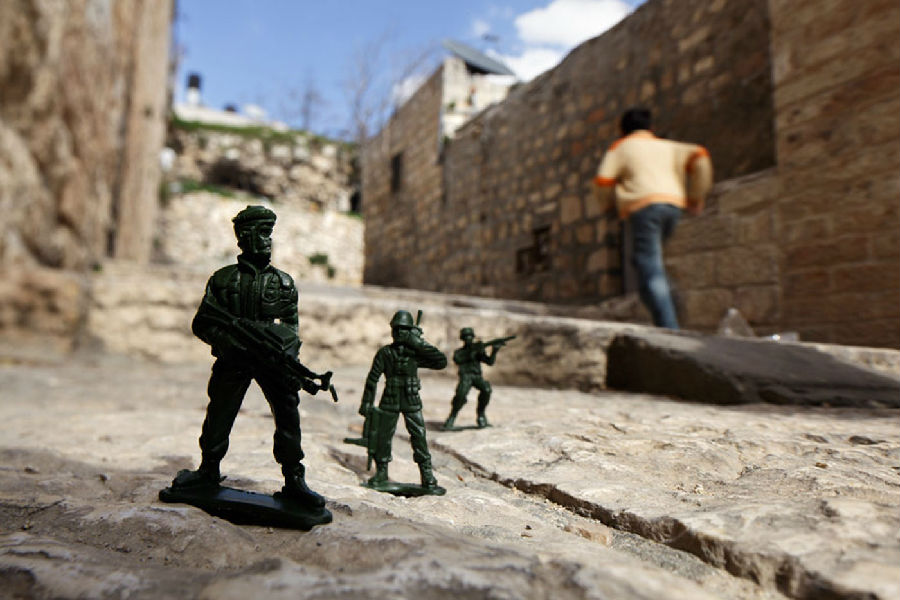 JULIA GRIFFIN: McCarty's photographs are based on drawings done in art therapy sessions organized by aid groups and United Nations agencies. Then, with the help of dolls, tanks and other playthings from nearby vendors, he uses a camera's lens to tell the child's story, often at the exact spot where the trauma occurred.

JULIA GRIFFIN: The resulting photographs depict the cost of conflict with a poignant dose of pop culture. An Iraqi boy haunted by the memory of soldiers shooting civilians at an Islamic State-controlled checkpoint. A Syrian refugee isolated and plagued by survivor's guilt after her family was killed in that conflict. And the Iraqi girl whose drawing of a flower revealed a woman stoned to death by ISIS for not wearing the correct face veil. Since 2011, McCarty and therapist Myra Saad have worked with hundreds of boys and girls from Iraq, Syria and other conflict-ridden nations in the Middle East, like Iraqi refugee Nourham Saleh.

NOURHAM SALEH, Iraqi Refugee (through translator): It is about the bridge. It was destroyed. We crossed it while it was broken. I was dizzy. I was scared.

JULIA GRIFFIN: Whether they draw literal representations or use symbols, like an uncolored elephant that represents a dead sibling, War-Toys provides its young participants an outlet to process their emotions, and helps viewers relate to far-off tragedies.

BRIAN MCCARTY: You get this thing where people, no matter where they are, if they had been around toys, if it has been part of their lives growing up, they will connect to this, especially for Western audiences, where it is so easy to cast people in war zones, whether they be Arab, Kurdish, whatever, as the others.

JULIA GRIFFIN: But staging nearly 150 photos in war-torn areas comes with its own hazards. McCarty must regularly navigate shrapnel and other rubble. He has been targeted by Islamic State snipers. And once, on the outskirts of Mosul, Iraq, he used only a flashlight to create a photograph of families sneaking out of ISIS territory. At the time, triggering a camera strobe was considered too risky. Still, McCarty hopes his efforts are worth the risks.

BRIAN MCCARTY: I went in to this project from a very academic, artistic point of view. And all of that of went out the window when I saw a little girl coloring in pools of blood for the first time. You instantly become an activist artist. There is no way to not connect with this, to not, sorry, I am going, it's only sometimes. But, yes, there is no way not to want to effect change and do what you can.

JULIA GRIFFIN: McCarty posts many of his photographs his Instagram page, and exhibitions of his work are planned in Saginaw, Michigan, and Beirut, Lebanon, next year. He hopes to expand the project to Ukraine, African nations gripped by civil war, and even portions of the U.S. plagued by gun violence. And with no obvious end to conflict in this world, War-Toys could be an series that never concludes. For the "PBS NewsHour," I'm Julia Griffin.