The surrender of Japan in August nineteen forty-five ended the Second World War. Americans looked to their new president, Harry Truman of the state of Missouri, to lead them into a new period of peace. No one expected President Truman to be as strong a leader as Franklin Roosevelt had been. And at first, they were right. Truman had one problem after another during his first months in the White House. Truman's first big problem was the economy. In the days after the war ended, almost two million Americans lost their jobs as arms factories closed. Americans everywhere worried about what would happen next. Only a few years before, the nation had suffered through the worst economic crisis in American history. No one wanted to return to the closed banks, hungry children, and other sad memories of the Great Depression.

In some ways, the economy did better than experts hoped. The gross national product dropped only a small amount. Many Americans still had money they had saved during the war. And Congress passed a law to help people to keep their jobs. The situation could have been much worse than it was. However, the economy also could have been better -- much better. Suddenly, almost overnight, the price of everything began to rise. Clothes that cost five or six dollars yesterday now cost ten to fifteen dollars. Used automobile tires sold for the surprisingly high price of twenty dollars. President Truman tried to stop the increases through a special price control agency that had been created during the war. However, people by the thousands refused to follow the government price control rules. Instead, they set their own prices for goods. Store owners would tell government officials that they were still obeying the price rules. But often they charged whatever they wanted for goods. A meat salesman, for example, might say there was no good meat that day. But for three dollars extra, he would suddenly find a thick piece of meat to sell. A car salesman would sell his cars at the controlled price. But he might insist that the buyers also buy his dog for five hundred dollars. And his dog would return home that night.

It was not just store owners who were charging more and refusing to obey government price rules. It was also the woman who rented a house to a young family...the farmer selling food...and finally, most importantly, it was organized labor. President Truman had always been a friend of labor unions. But during the first months of his administration, he became involved in a fierce struggle with coal miners and railroad workers. The first sign of trouble came in September nineteen forty-five. A group of workers closed down automobile factories at the Ford Company. Then, workers at the General Motors auto company went on strike. Soon there were strikes everywhere. Workers went on strike in the oil industry, the clothing industry, the wood-cutting industry and the electrical industry. The strikes made Truman angry. He believed the striking workers were threatening the economy and security of the United States.

He got even angrier when representatives of striking steel and railroad workers came to the White House and refused to accept a compromise wage offer."You are crazy," Truman told the union leader, "if you think I am going to sit here and let you stop this whole country." Truman ordered government forces to take over the railroads and the coal mines. And within a short time, the striking coal miners returned to work. However, the president had less success with the railroad workers. He became so angry with them that he asked Congress to give him the power to draft all striking rail workers into the armed forces. The rail strike finally ended. But millions of Americans lost faith in Truman's ability to lead the country, to bring people together, and end disputes peacefully. By late nineteen forty-six, most Americans believed that the man in the White House did not know what he was doing. Truman seemed weak and unable to control events.

Union members disliked him because of his violent opposition to the coal and rail strikes. Farmers opposed Truman because of the administration's effort to keep meat prices low. Conservatives did not trust the reforms that Truman promised in his speeches. And liberal Democrats watched with worry as many old advisers of Franklin Roosevelt left the government because they could not work well with Truman. In November, nineteen forty-six, the people voted in congressional and state elections. The results showed they were not satisfied with Truman and the Democratic Party. Republicans won control of both houses of Congress for the first time in eighteen years. And Republicans were elected governor in twenty-five states. The election was a serious defeat for the Democrats. But it was a disaster for Truman. Some members of his party even called on him to resign. Few people gave Truman much chance of winning a second term in the White House. However, Harry Truman began to change in the months that followed. He started speaking with more strength and firmness. He showed more understanding of the powers of the presidency. And in matters of foreign policy, he began to act more like a president. This was especially true in Truman's reaction to Soviet aggression in Germany. 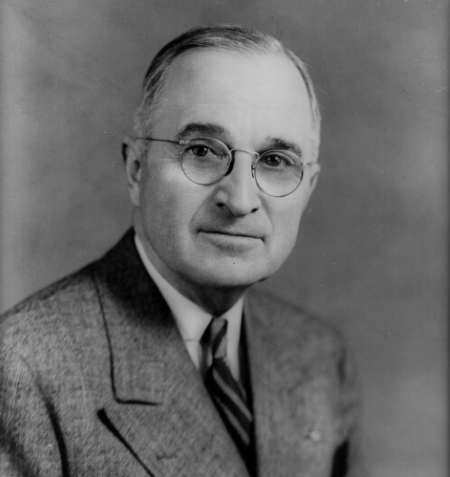 Truman wanted to rebuild Germany, as well as the other countries of Western Europe. His administration worked closely with west European leaders to rescue their broken economies through the Marshall Plan. But the Soviets did not want to see Germany rebuild, at least not so quickly. So at first, they flooded Germany with extra German currency in an effort to destroy the value of the German mark. They walked out of economic conferences. And finally, in early nineteen forty-eight, they blocked all the roads to Berlin to try to cut off the city from the western powers. The Soviet actions were a direct threat to the west. Truman had three difficult choices. If he did nothing, the world would think the United States was weak and unable to stop Soviet aggression. If he fought the blockade with armed force, he might start a third world war. But there was another choice. That was to fly supplies to the city. The American military commander in Germany proposed the idea of dropping thousands of kilograms of food, fuel, and other goods to the people of Berlin by parachute. Not just once, but every day, as long as the Russians continued their blockade. It would be a difficult job.

West Berlin was home to two-and-a-half-million people. No one had ever tried to supply so large a city by air. Large C forty-seven transport airplanes would have to take off every three-and-a-half-minutes all through the day and night, every day, to supply the people of Berlin with enough food. The people of Berlin gave needed support from the ground. More than twenty thousand Berliners worked day and night to build an extra landing field for the American airplanes. It was not long before it became clear that the American air rescue would succeed. West Berlin would remain free of Soviet control. The Russians soon understood this fact, too. In May of nineteen forty-nine, almost one year after they had started their blockade, they ended it. The crisis in Berlin changed the way many Americans saw their president. Harry Truman no longer seemed so weak or unsure of himself. Instead, he was acting as a leader who could take an active part inworld affairs. Truman's popularity increased. However, most Americans did not expect him to win the presidential election in nineteen forty-eight. Almost everyone believed that the Republican candidate would capture the office. The election campaign that year turned out to be one of the most exciting and surprising in the entire history of the nation. That nineteen forty-eight election will be our story next week.
pBYbL^Fy[|zh

You have been listening to THE MAKING OF A NATION, a program in Special English by the Voice of America. Your narrators have been Harry Monroe and Rich Kleinfeldt. Our program was written by David Jarmul.