Welcome to People in America in VOA Special English. Today, Rich Kleinfeldt and Sarah Long tell about the life and work of one of the most influential musicians of the twentieth century -- Leonard Bernstein. This music was written by Leonard Bernstein. He composed it for the opening of the John F. Kennedy Center for the Performing Arts in Washington, D.C., in nineteen seventy-one. Leonard Bernstein lived from nineteen eighteen until nineteen ninety. During his seventy-two years he was one of America's most hard-working musicians. He was a composer, conductor, pianist and teacher. He wrote both serious classical music and light popular music. He was musical director of the New York Philharmonic Orchestra for more than ten years. He often played the piano while leading an orchestra at the same time. He taught many other musicians. And, he appeared on television programs and wrote books to help people -- especially children -- learn about music.

Leonard Bernstein was born in Lawrence, Massachusetts, on August twenty-fifth, nineteen eighteen. His parents were Jews from Russia. They met and married in the United States. Leonard demonstrated early in life that he had special abilities in music His father, however, did not believe his son could support himself as a musician. The older Bernstein continually advised against it. Luckily, his son rejected this advice. Leonard studied music at Harvard University and the Curtis Institute in Philadelphia, Pennsylvania. He spent summers at a famous music center in Massachusetts called Tanglewood. There he studied conducting with two major musicians of our time -- Serge Koussevitsky and Fritz Reiner. Later Leonard Bernstein would return to Tanglewood to teach almost every summer of his life. In nineteen forty-three, Leonard Bernstein became assistant conductor of the New York Philharmonic Orchestra. In November of that year, New York Philharmonic conductor Bruno Walter became sick and could not conduct an important concert.

Mister Bernstein was called to lead the orchestra very soon before the event. He had little time to prepare. Still, he did so well that the New York Times newspaper published a story praising his effort. The story appeared on the front page the day after the concert. After that, Leonard Bernstein was invited to conduct concerts of almost every major American orchestra. In nineteen fifty-eight, he became musical director of the New York Philharmonic. He was the first American to hold that position. Critics said the well known orchestra became even better under his leadership. He was the main conductor of the Philharmonic until he resigned in nineteen sixty-seven. Leonard Bernstein became involved in many more projects after leaving the New York Philharmonic. People said he was like a powerful ocean storm. He seemed to live his whole life in a hurry. Mister Bernstein traveled around the world to act as guest conductor of many orchestras. He wrote music and taught music. At home, he and his wife, Chilean actress Felicia Montealegre, were raising their three children. Their home was a gathering place for some of the most influential artists, musicians and writers in the United States. 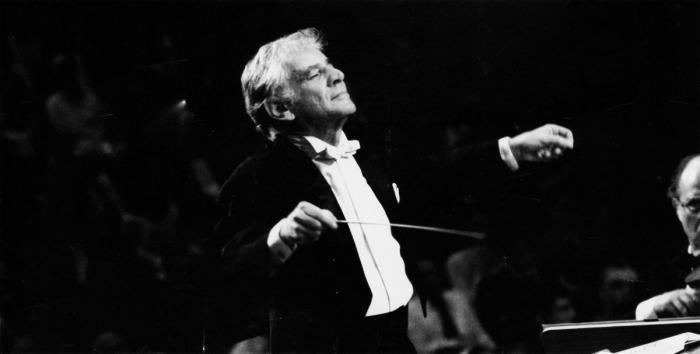 As the years passed, Leonard Bernstein's many musical skills made him known around the world. He won high praise as a pianist. Listen now as he plays "Piano Sonata" by his friend Aaron Copland. Critics say Bernstein wrote some of his best work in his early years. He wrote "Symphony Number Two, the Age of Anxiety" in nineteen forty-nine when he was about thirty. Musical experts say the piece captures the sounds of America. That piece was among several large works Leonard Bernstein wrote for symphony orchestras over the years. He composed several symphonies that demonstrate his deep interest in his Jewish religion. Mister Bernstein wrote other major classical works through the years for a large group of singers and an orchestra. He also composed operas and ballet music.

Many people think these classical works are not as great as some of his musical plays for Broadway such as "On the Town," "Wonderful Town" and "Candide." Some music critics say "Candide" is the best music Leonard Bernstein ever wrote. The musical "West Side Story" is considered Leonard Bernstein's most famous work. It opened on Broadway in New York City in nineteen fifty-seven. It still is being performed all over the world. The show tells a story similar to "Romeo and Juliet," the famous play by William Shakespeare. Stephen Sondheim wrote the words to the Bernstein music. "West Side Story" guaranteed Leonard Bernstein a special place in American musical theater. Here tenor Larry Kert sings "Maria," one of the most beautiful songs from "West Side Story."

Leonard Bernstein worked for three years on "Mass, A Theater Piece for Singers Players and Dancers" to be performed at the Kennedy Center opening. Two hundred people are in this huge work. Its name comes from the religious service of the Roman Catholic Church. The story tells of a young man who loses his belief in God. "Mass" is the closest Mister Bernstein ever came to joining the styles of Broadway and classical music. It contains rock music, blues music, and religious music.

Throughout his life, Leonard Bernstein was involved with social issues as well as music. He supported the civil rights movement and opposed the Vietnam War. He conducted concerts to raise money for AIDS research. In his later years, he wanted to write something that he knew would be remembered always. But he was in poor health. Still, he kept composing, directing and speaking. He gave his last performance in August, nineteen ninety, at Tanglewood. Less than two months later, he died in his New York home. He will be remembered always for his many musical gifts to the world.